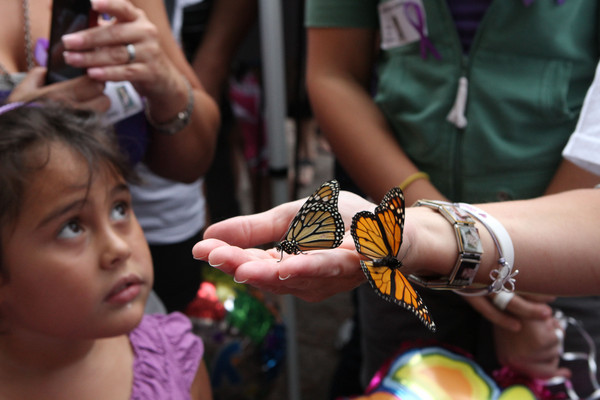 For more than 100 Girl Scouts, Sunday's trek along the nature trails at the Museum of Arts and Sciences wasn't only a chance to celebrate the organization's 100-year anniversary.

It also was a chance to learn about nature -- specifically, how butterflies live in the natural world.

Six Girl Scouts were randomly selected to release about 500 American Painted Lady butterflies into the forest, followed by everyone singing "Happy Birthday" to the organization that was founded by Juliette Gordon Low in Savannah in 1912.

Blair Train, fund development manager for the Girl Scouts of Historic Georgia, said the idea to release the butterflies came from the Girl Scouts council as something different to celebrate the anniversary.

"This is a very good setting with all of the plants here," Train said. "This is the first one we've ever done. ... It's something we can make fun and educational. The girls can get ideas which plants attract butterflies."

Organizers chose American Painted Ladies, or Vanessa virginiensis as they are scientifically known, because they are common in North America, especially in Georgia and throughout the Southeast.

The butterflies, with brown, fuzzy bodies and orange-and-black wings, only live for a short time.

As caterpillars, they feed on a variety of plants, including aster, dill, foxglove, snapdragon, sunflower and many others.

Delaney Pearson, 7, of Milledgeville, was one of the six girls selected to open the boxes and release the butterflies. She was happy to be chosen because "I wanted to see them fly away," she said.

She said there are a lot of aspects of being a Girl Scout she enjoys.

"I like helping people," she said, adding that camping is one of her favorite activities. "I like spending time with my friends."

Her mother, Brooke, serves as troop leader and also was a Scout herself.

"I think (Delaney) gets a lot as far as leadership skills," she said. "She gets to spend a lot of time with her friends, and they learn how to work together as a team. ... It's great because of all the activities they get to do. ... I was a Girl Scout, and I had a great experience. I want my girls to have the same experience."

As the butterflies flew out of the boxes, many of the girls squealed with delight as butterflies landed on them. One girl held a butterfly on the edge of her finger, saying "That tickles!" over and over, while other shouts included "There's one on your hat!" and "One landed on my head -- again!"

The girls also made butterflies out of coffee filters and got to tour the grounds with Georgia Master Gardeners as their tour guides. Jackie Harper, one of the master gardeners, said they explained to the girls how butterflies eat and survive in the wild.

"I think being exposed to the garden's life is important," she said. "A lot of (the garden) occurs naturally, with non-invasive plants. We're showing them that (the garden) sustains not only butterflies, but other forms of life."